As a child I don’t remember hearing much about angels. I was probably told something, but at that age, I tended to space out and enjoy living in lala land. I’d stare out of the car window and think about books I’d read like The Secret Garden (“Why didn’t I have a secret garden? Where could I find one? Do they have any in Oakland?”).

The first time I saw an angel, I was in my bed, awake but couldn’t move. A figure at the foot of my bed who exuded more authority than anyone I’d ever met was speaking to me, or rather, proclaiming declarations at me. They didn’t use words. As he spoke (I never saw a face but it felt quite masculine), the information was like lightbulb after lightbulb being lit- the truths were deeply profound and illuminating. 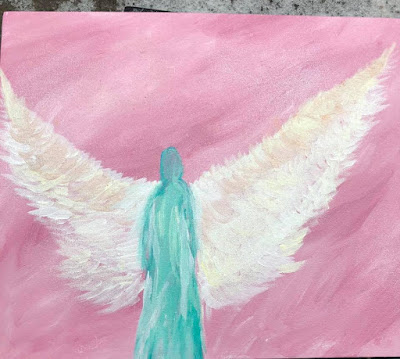 I remember being in complete awe at the words being poured into me: the truths seemed so obvious in hindsight but I never would have thought of them on my own.

And then as suddenly as he was there, he wasn’t. I was alone in my bedroom, sat up, and to my great displeasure, could not remember anything he’d said except the last light which boomed in my consciousness.

“If you knew the true cost of conflict, you would never engage in it.” I knew he was speaking about conflict in the sense unnecessary clashes between other humans. I wish I could say I follow his advice well, but I’ve never forgotten it.

The second time I saw an angel was much more beautiful. I was going through a very hard time in my life and the night before had begged God to see an angel. I actually cry prayed to see one, not for the sake of being wowed but because I wanted the reassurance and beam of hope.

The next morning, I drove through the Krispy Kreme drive-thru for coffee like I’ve done many times. I hadn’t bothered to get dressed because I’d planned to just grab a coffee, a bagel and return home so I was wearing sweatpants and a hoodie with no bra, no makeup, and looked a mess.

As I was pulling out of the lot, coffee and breakfast in hand, I saw, like a memory in my mind’s eye, me standing on a grassy mountain and finally seeing an angel in the sky. I recognized the mountain as in a little mountain city I love visiting about an hour away and since no one was waiting for me at home, turned on to the freeway in that direction.

I didn’t even think about the fact that I wasn’t dressed because I was going to a grassy field on a mountain right? It’s not as if angels care what we look like, I thought.

An hour later, I pulled up to where I usually would turn to the east climb up the mountain and my car wouldn’t cooperate. It was ridiculous and I was mad. Each time I pressed on the ignition, the car would skid back and forth as if on ice even though it was just after summer and warm. The light indicating icy conditions even popped up on my car. I’d driven up that road more than 10 times no problem and it was 100% free of debris.

I took it as a sign and backed up, returning to the main road that snaked up the hill, not knowing where I was going. I’d never been that far.

I drive for about twenty minutes, monitoring my gasoline because I didn’t want to get trapped up there. Right before I was about to turn around, the road opened into a small mountain town that I didn’t know existed. It was quaint and adorable.

I didn’t know where to go but after stopping to get my bearings, a nice groundskeeper of a property, pointed me toward the cutest little small white country church I’d ever seen. I was torn. I was NOT dressed for a service (hoodie with no bra, people) and without an invisibility closing, people would see and talk to me. With the size of the town, they probably all knew each other, too. And did I want to sit through a random service anyway? What about the field? I’d been promised a field, no?

But it was really the groundskeeper’s eyes and the way he pointed to the church down the way...it felt so right. It didn’t feel like a suggestion, it felt like an appointment.

30 minutes later, I’d been greeted by 7-8 super kind people and was sitting in an almost empty pew in the kind of church you see in Hallmark original movies set in the English countryside. I’d gotten past the urge to bolt, but didn’t want to hurt anyone’s feelings as they’d been so nice despite me looking a bit disheveled.

A woman was at the front speaking about the story of Hosea, a man God had instructed to marry a prostitute who kept cheating on him and even having kids with other dudes. But he was told, by the Divine, to keep accepting her back with love and devotion as a metaphor for God’s unfailing grace and love for us.

As the young woman, who wasn’t the regular pastor but a member, spoke, I had a realization...for so long I’d felt like God had abandoned me, but it had been me that walked away, and even then, I’d never been alone. As I had that thought, I was filled with an intense happiness.

That’s when I saw two lights on either side of the women, giant orbs, and then beside her, a figure of blue light began to materialize. It did not have wings, was not male or female, but it started taking form from the top down, stopping before the waist and I was afraid to blink lest I missed A THING.

It had clear features of the sweetest, kindest face and it’s head was turned to the woman speaking with an expression of love so gentle and beautiful and serene....when I think about its face, my insides go all puddly and my eyes still get teary because I’ve never seen anyone with that look, not even a mother to child. It was pure love with a touch of protection and pride like, “you’re doing amazing.”

I wanted so badly to try and take a photo but I was afraid to look away or even blink. There was a figure of translucent blue light standing shoulder to shoulder with this woman who seems to know her, but all I could do was stare. It couldn’t have lasted more than 10 seconds but it felt so much longer.

After, I went up to the woman and told her I thought she did a great job. The thought of saying something ran through my mind but I couldn’t. What would she say to the chick in pajamas who said, “Oh yeah, I saw an angel next to you. Blue. Enjoy your day.” She’d probably think I was a lunatic.

That was about five months ago. One would think an experience would make your faith rock solid and change everything, but humans are weird.

I had one more experience that was sad. I’ll write about that soon I hope, but it still makes me sad to think about.

Anyway, I’d love to hear your stories. Have you ever seen an angel? Do you believe in angels? Share if you’d like. I know these things aren’t always easy to talk about because if feelings like sharing a precious stone that you keep sacred by keeping secret, so don’t feel pressure. For me, if just felt like time.

I hope your day is beautiful. Love, Bunmi 🌹
Posted by BunmiL at 9:55 AM