I have a friend named Helen. We talk every day and I tell her things no one else knows, but our friendship hasn't been an easy because of me. I'm not only desperately introverted, I find trusting people very difficult. Somewhere along the line, I began to believe that people are dangerous. I'm good at superficial relationships and have no problem pouring myself into my writing but one on one, eye-contact-full, in-person, in-depth, consistent bonds? No gracias.

So, as she would want to get closer to me, I'd pull away, behaving much like a feral cat defending their section of a garbage-filled alley. I'm ashamed to admit that I've hurt her feelings with my unwillingness to let her in and my ever-present desire to just run from her genuine care of me.

I'm gullible and have been used before- more than once- and thought she must want something from me. Something out of me. So I kept her at arms length, no, city length, country length, I put up wall after brick wall up against someone who just wanted to be there when God knows I needed someone who cares.

But over time, about two years in to be specific, I began to let her in. The feral cat in me retracted her claws and eased out of the scared, fur spiked up, hunch position into something more relaxed.

Helen has been through a lot in life. She jokes that the devil did everything possible to make sure she wasn't born. Her grandparents barely survived the Holocaust, her birth itself was a miracle and her upbringing and adulthood were filled with struggle just to live. But instead of becoming afraid or hardened, she exudes what I can only describe as Divine love and has a way of taking the most lost, invisible, and damaged people around her and adopting them into her family.

At a time when I was really struggling with my faith in anything, she talked about God like a best friend. It was like she had a special 1-800 number directly to heaven because when she prayed, the air around me shifted.

A few days ago she was telling me how she saw an online tutorial for making stuffed creatures out of socks. This wasn't surprising to me, Helen can make pretty much everything. She sews, crochets, and pre-Rona we used to cruise Michaels for supplies for her latest projects. A sock stuffy would be a piece of cake.

Like everyone else's kids, mine love the game Among Us. It's an online "who done it" game with these weird little dudes called crewmates in space murdering each other. Super wholesome. Just because she's Helen, she told me she's making each of my kids a crewmate sock stuffy and asked what colors they would like.

I gave her the colors. She told me she'd make me one, too and I was touched and thanked her. When they were done yesterday, I socially distanced picked them up. To show my thanks I brought her sweet potatoes and cabbage (she likes those things and I'm not good at crafting).

She said she hadn't finished my crewmate yet, which was fine of course. We said goodbye and later that night she texted me that she was just about to start on my little plushie when she “heard different.” The thing about Helen is that sometimes she knows things. Don’t try to make sense of it. It’s happened more than once. Like I said, direct line to heaven.

Then she sent me a photo of the little pink cat she’d made me and I almost fell over.

When she’d told me she was making me an online game stuffy, in my mind I’d thought “that’s nice, but I’d really love an animal.” I didn’t say it because that’s rude. “You don’t look a gift horse in the mouth,” my parents used to say. It was a whisper of a thought.

I haven’t told anyone my favorite cartoon animal is called Pusheen Cat. It’s a grey chunk of a cat who is often featured taking a nap, baking or celebrating a birthday but always with a non-smiling neutral expression and is my personal patronus. And that’s she made me.

I asked her how she knew to make that, already knowing what the answer would be.

There are religious people and then there are those who commune with God and Helen is the latter.

I called her, as I walked my dog in the freezing cold night, in disbelief. “Why would God care about what kind of stuffed animal I want?”

I could hear her smiling as she spoke, and she explained to me that His love isn’t theoretical or limited to housing, jobs, and putting out the fires in our lives.

Lately for me, life has felt more out of control than ever: people are dying, hurting, and suffering in the world. I’m homeschooling and working best I can but often feel like I’m failing at both. While I believe deeply in God, my prayers sometimes feel like one way conversation as I list off the things I need Him to fix and in what order. I’ve felt panicky, afraid to read the paper. Not knowing what life will look like in one month, three months, or six months.

And then, just when I needed it most. I’m given the cutest, softest reminder that He’s here. He’s listening. He’s seeing and He’s working.

If the grandchild of Holocaust survivors who has known so much loss and pain can have faith in these times, I can, too. My faith might be an autumn leaf, barely attached to a thin branch, fluttering with the icy wind, but that’s ok for now.

For as long as I live, my pink stuffy, who I named Nes (it means “miracle” in Hebrew) will remind me that even in these days where the uncertainty won’t let up, God is here, at work, and is bigger than my fears.

So thank you, Helen, for not giving up on me and for Nes. 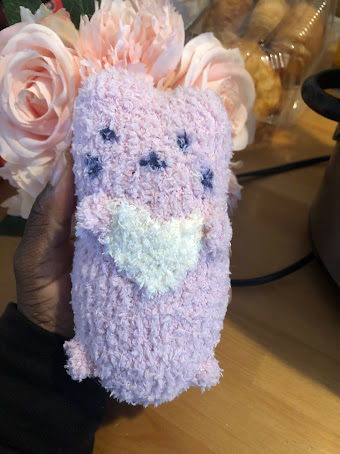